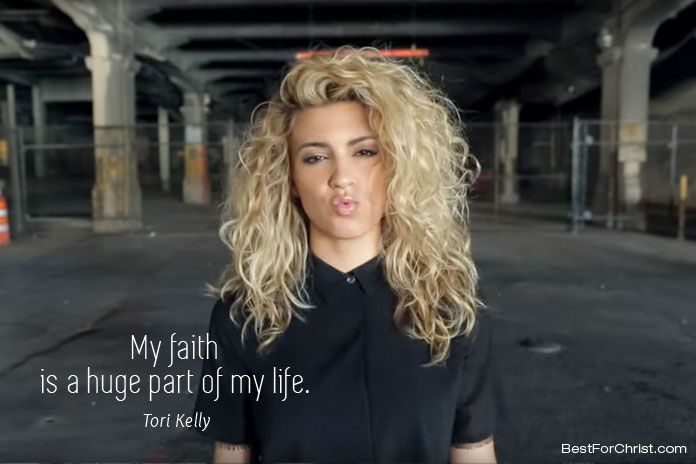 Tori Kelly is set to showcase her Christian faith to multitudes of her fans worldwide. She releases her album Hiding Place. This album is Tori Kelly Christian Faith manifestation. Grammy-nominated artist teamed up with the Gospel bigwig – Kirk Franklin, to provide the contents for the now highly-anticipated piece.

In a recent interview with the ABC News Radio, the apparently fulfilled Tori expressed her happiness for getting to work with the Kirk Franklin, whom she described as a “legend.”

“I grew up on gospel music, so the fact that a legend like Kirk Franklin would take me under his wing was just a dream come true,” she revealed.

According to earlier reports credited to the news station, Kelly and Franklin were expected to do a song together, but the expected collaboration later grew into something bigger – an entire gospel album.

Interestingly, Franklin has never co-written an album with anyone throughout his notable career; Hiding Place is the first. The contents for one half of the album was prepared by Kelly, while Franklin co-wrote the other half.

“Never Alone,” another joint work of Kelly and the 12-time Grammy-winning gospel artist, has been topping charts consistently, with millions of views to its credit. The visuals showed Kelly in a church, and singing her song of hope. Franklin would later be part of the scene towards the end, coming aboard with his preaching, rendered through unique and powerful lyrics coupled with captivating dance moves.

Reaction videos of “Never Alone” has since flooded the social media, with Kelly’s three million Instagram followers being at the centre of the show.

“Hiding Place,” as a title for the upcoming album, was inspired by the contents of the book of Psalms. The Psalm 32 says: “You are a hiding place for me; you preserve me from trouble; you surround me with songs of deliverance.”  Other notable features in the album include songs with stars Lecrae – “Masterpiece” and Jonathan McReynolds – “Just As Sure.” This shows that Tori Kelly Christian faith is strong and she wants to spread the message of Bible to all people.

Earlier this year, Kelly had come out with her Christian faith at the Harvest Christian Fellowship Church in Riverside, California.  While addressing his congregation, the lead pastor – Pastor Greg Laurie – informed his church of the songstress’ faith in Jesus Christ. He also recalled how Kelly was raised in the church. Her mother even came to Christ during one of his Harvest services held in Riverside.

Kelly went on to explain her encounter at the age of five, which helped her realize how real her faith is. The young Kelly said a stunning response to an instruction, which asked her to look both ways before crossing the street. According to her exact words: “‘It’s fine, I’ll just go to Heaven if I die” didn’t only shock his aunt who was at the scene, but further strengthened her faith in her eyes.

She had also shared Tori Kelly Christian faith at her concerts, by delivering impromptu worship performances. The artist sang “Oceans” (a Hillsong United song) during her New York Concert in 2015. The video of the performance, which recently resurfaced, had led to massive support from the Christian community.

Since the 2015 performance, Kelly had released hit singles with forerunners in the Gospel realm – Lecrae and Amy Grant.

The release date of Hiding Place has been set for September 14.

Do It Again Elevation Worship Song Lyrics and Music Chords