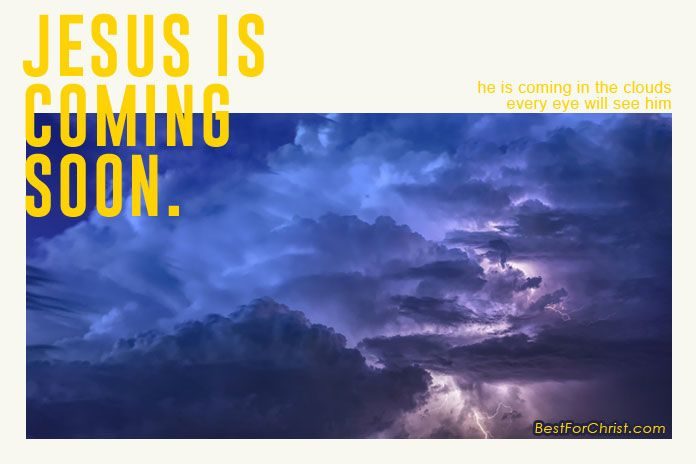 Franklin D. Roosevelt once said “We have nothing to fear but fear it self”. But another great man, Rod Serling, said “You have just entered the twilight zone”. So what is your fear? Did you sleep with a night light on when you were little? Did you fear sleep because of nightmares? Or was it that first date? We have all been afraid of some or many things in our life time. As adults it’s the bills, health, and our kids. But do you fear the second coming of Christ? If you’re not ready to meet him, you should. Let’s take a look how the second coming of Christ in the Bible is described.

The full description of the second coming of Christ in the Bible can be found in Matthew 24:33-51.

“But concerning that day and hour no one knows, not even the angels of heaven, nor the Son, but the Father only. For as were the days of Noah, so will be the coming of the Son of Man.

For as in those days before the flood they were eating and drinking, marrying and giving in marriage, until the day when Noah entered the ark, and they were unaware until the flood came and swept them all away, so will be the coming of the Son of Man.

Therefore, stay awake, for you do not know on what day your Lord is coming. But know this, that if the master of the house had known in what part of the night the thief was coming, he would have stayed awake and would not have let his house be broken into. Therefore you also must be ready, for the Son of Man is coming at an hour you do not expect.

“Who then is the faithful and wise servant,[whom his master has set over his household, to give them their food at the proper time? Blessed is that servant whom his master will find so doing when he comes. Truly, I say to you, he will set him over all his possessions.

But if that wicked servant says to himself, ‘My master is delayed, and begins to beat his fellow servants and eats and drinks with drunkards, the master of that servant will come on a day when he does not expect him and at an hour he does not know and will cut him in pieces and put him with the hypocrites. In that place there will be weeping and gnashing of teeth.”

In such a way described the second coming of Christ in the Bible but what do you think and how you feel about this?

Are you Ready for Second Coming of Christ?

Ever since the Garden of Eden, man has had to get ready to meet Jesus. “For all have sinned and come short of the glory of God.” (Romans 3:23). A Jesus movement song in the late sixties by Country Faith was “I wish we’d all been ready”. It’s about what happened when Christ came back and you weren’t ready.

A bus traveling down the street, Christ came back and the driver was a Christian, I wish we’d all been ready. People, imagine being with your spouse and they’re a Christian and your not and you wake up and their gone.

You go outside and cars have crashed and there’s no driver in some of the cars. Your turn on the TV and there is panic in the streets. People are missing all over the World, and what do you do? “I wish we’d all been ready”. And where are all the little kids, and babies? Then you notice that planes have dropped from the sky, where’s the pilot?

The next day the papers are saying Christ came back. You thought you ready then what happened? Your prayer life slipped, you stopped going to church because it brought back memories you refuse to face or you didn’t like the pastor. Then you started to really slip.

The language changes, your friends change and you fail to see the signs of the second coming. Then it’s too late, you’re left behind. You run to the church you used to god and it’s locked. No one is coming to open it anymore.

Well guess what you just had a wake up call. God is telling you that the time is near and your Christian life needs help! You look over and your spouse is still there and the kids are asleep in their beds. So now what? First you give thanks to God for the dream and you then make thing right with Him.

Only God Knows when the Second Coming of Christ will Happen

Second coming of Christ in the Bible is described in Luke 12:7: “And he knows the number of hairs on your head! Never fear, you are far more valuable to him than a whole flock of sparrows”

The time is near and you must be ready for the meeting in the sky. No one knows the day or the hour when Christ comes back, not even Christ. People have tried to give a set time and day for His return and all have failed. People have sold all their possessions and stood on a hill for up to 3 weeks waiting and then left to try and start over again. Cult leaders try to rush it by having people commit suicide and wait for the Halebob comet, and for what, nothing.

Is there a second chance, do you really want to take that chance? Well do you? Are you ready to meet Jesus? Read about the second coming of Christ in the Bible. Has your life started to slip a little or a lot? Then pray to Jesus and ask for guidance and forgiveness. Make it right before it’s too late. What do you have to fear?

Dear Jesus, please hear these voices right now and grant them eternal life. Touch their hearts and lead them back to you. God bless the people that fear your second coming and wake them up! Lord we thank you for the gift of life eternal and pray for your speedy return. Bless us all in the name of Jesus. Amen.

Related Articles: A question of faith. Am I wrong to have Christian faith and God questions?

How to trust God in difficult times? Believe and trust in slow work of God

A question of faith. Am I wrong to have Christian faith and God questions?

How to Know when God is Speaking to you through Bible...

Are you accepting Jesus Christ into your heart as Lord and...