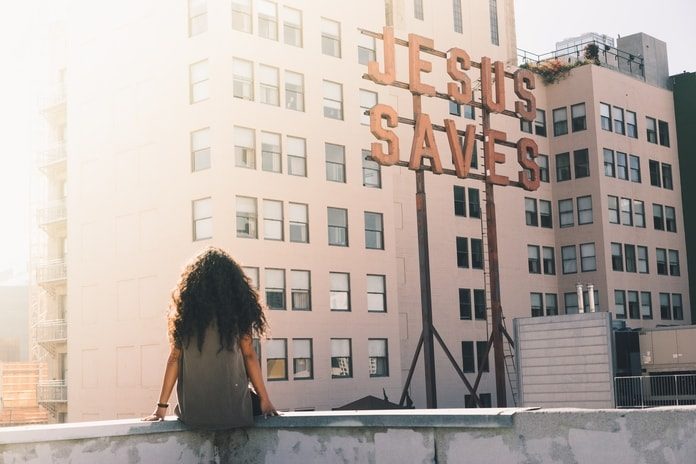 We all come to Jesus with different backgrounds and experiences. This includes former atheists, or individuals who previously did not believe in God.  God’s Grace is powerful! Some former atheists might ask: “How can I reconcile with God after years of not believing? The only thing that did was to make me believe that I need God and His Grace to guide me in this world. How do I reconcile with God, after my blatant disregard for him and his principles for such a large portion of my life?” For this you need to know about the God’s plan of redemption for mankind and  God’s redemptive love.

We can answer this question by studying an example of how God can redeem the life of an individual.

Understanding the depths of our sin helps us understand the depths of His love (Ephesians 3:14-21). Nothing can separate us from His love (Romans 8:39). God is able to take old things and make them new.

God intervened in the life of a man who also had blatant disregard for Jesus Christ as Lord and Savior: Saul of Tarsus was an enemy of the church but he later became the Apostle Paul. He was born into the Jewish faith and was a Pharisee (Philippians 3:5). The Pharisees were part of the Jewish spiritual and political leadership who established strict guidelines for the Jewish people based on the Law (Old Testament).  They were so focused on strict obedience and legalism that they missed the greatness of the God in the Scripture.  Paul said he was zealous about persecuting the church (Philippians 3:6).

The first time we meet Saul, he is giving approval to the execution (martyrdom) of a Christian named Stephen (Acts 7:54-8:1). Saul was there watching a man get executed and nodding his approval. Saul gleefully “began to destroy the church” and put people in prison (Acts 8:3). That is the kind of man that Saul was. Saul continued his rampage of murder and arrest against the church (Acts 9:1-19) until God intervened.  Saul was on a journey to Damascus and Jesus spoke to him and said, “Saul, Saul, why do you persecute me?” By persecuting Christ’s followers, Saul was persecuting Christ Himself!  Saul, temporarily blinded, was led into Damascus.  God sent Ananias to pray for Saul.  Saul became a Christian!

Saul transitioned from being a persecutor of the church to a missionary (Acts 13:2).  Paul went on missionary journeys throughout the Mediterranean.  Paul went on to be a key figure in the early church.  He made powerful, life-changing speeches.  He planted churches, appointed leaders, and wrote letters to believers throughout his life.  In the end, he was imprisoned, persecuted, and died for his faith.

God can take a man who actively persecuted the church and change him into a powerful advocate and teacher!

Who were you before you were saved?

Like I said before, we all come to Christ with different backgrounds and experiences.  What makes us all equal in His eyes is our need for forgiveness, redemption, and His redemptive love.  Before we were saved, we were all pretty scummy:

That goes against what we want to believe – “I am a good person!”  Nope.  You’re not.  However, our old self was crucified with Him! (Romans 6:6)  Jesus Christ died for us – He took all the pain, suffering, and ugliness of the world upon Himself so that we can experience freedom.

Is the wrong that you’ve done unforgivable?  Is the wrong you’ve done too “big” for the sacrifice of the cross?  The answer is a resounding, “No!”  If you believe for one moment that the things you did or believed before salvation are is too big for forgiveness and redemption, than you are saying to Jesus, “Your sacrifice wasn’t good enough.”  Corrie Ten Boom* said, “There is no pit so deep, that God’s love is not deeper still.” Understanding the depths of our sin helps us understand the depths of His love (Ephesians 3:14-21).  Nothing can separate us from His love (Romans 8:39)!

God’s plan of redemption for mankind and each of us

Each person who accepts Him has come to a place where we recognize that we need Him.   Saul had a dramatic conversion experience.  He transitioned from being the kind of man who enjoyed others’ suffering to a man who suffered with the people he persecuted.  He found himself running from the very people he used to work with because he was a threat to their cause.

Christ changes the lives of every person who encounters Him and who accepts His invitation. He shows His redemptive love to everybody.  Jesus invited Simon called Peter and Andrew to, “Come, follow me” (Matthew 4:19).  They went from being fishermen to “fishers of men”.  You had a personal encounter with Him!  You’ve heard Him calling – and now your life is forever changed, too!  You are a new creation! (1 Corinthians 5:17). This is  a part of God’s plan of redemption.

Your mess becomes your message

Paul was a Pharisee and before his conversion Paul was a student of the law.  He knew the Old Testament forward and backward. When he became a Christian, what he knew didn’t disappear.  Instead, God used his knowledge to strengthen the message of the gospel and provide strong theological foundations for our faith!

How do you reconcile with God your former life?

What does it mean for your “mess” to become your message?  As a former atheist, you can share the Gospel in a unique way with people who are walking the path that you used to.  You can speak with other Christians about how atheists think and how did you find God’s plan of redemption.

We are a part of God’s plan of redemption

In the Parable of the Workers in the Vineyard, each of the workers was given the same salary whether they worked a full day or a few hours.  The reward for believers is the same, regardless of when we join the other workers in the field.  The five, ten, twenty, or fifty years that you lived before you came to Christ is not wasted – God doesn’t waste everything. He shows us His redemptive love. Don’t hesitate and reconcile with God! You are a part of God’s plan of redemption. Welcome to the Kingdom!

* Corrie Ten Boom was a Christian woman from the Netherlands who was in prison for helping save Jewish people from the Nazis during World War 2.  Corrie and her family members were in prison camps and suffered greatly.  After the war, Corrie became an author and inspirational speaker.

Related articles: How to Learn to Tell the Truth? Some Tips

How to learn to tell the truth? Bible verses and quotes...

How can I take steps to overcome sin temptation in my...