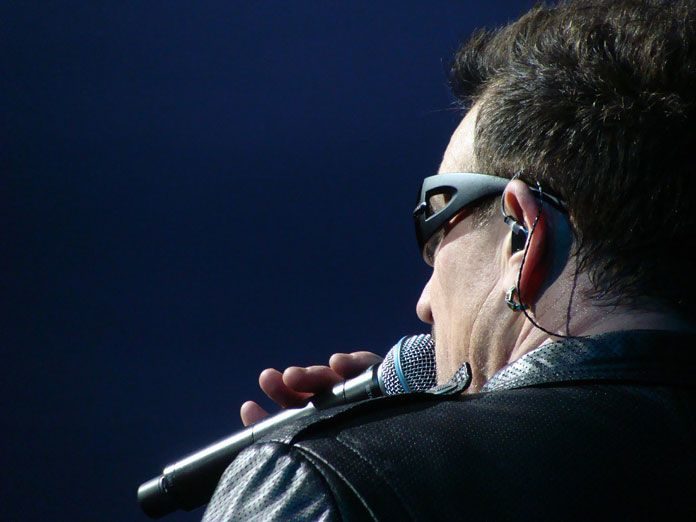 People participating at Sunday Mass in Bogotá (8 October) couldn’t believe their eyes, when they saw that one of the greatest world’s music stars U2 singer Bono participating in the Eucharist together with them.

He came to Mass like an ordinary parishioner and seated at the back of the church. Nobody even noticed and paid attention to him.

We quite often think, that people who we see on TV, playing on stage or acting in films, live in other planet and they only sometimes come to the earth to entertain us. Most popular show stars create such an image around themselves and of course we understand that image is very important for show business.

So we could understand why eyes of all parishioners in Bogotá church were directed to the only one person, who stood next to other ordinary parishioners in line for Communion.

Luckily, the singer was noticed only at the end of the Mass, so he could pray in silence together with his band members and all parishioners.

But after the Mass it was difficult for him to stay anonymous. People were very happy, that Bono stayed for short time in the church yard, talked to people, let everyone who wanted to take photo with him.

It’s interesting that he and his band members came to the Mass without guards, journalists and Bono hasn’t informed anybody about his plans. After the silent prayer and some communication with other parishioners he left church quietly. People say, that it seems that the main Bono purpose was to meet and spend some time with God.

2013 interview with Focus on the Family he said: “What’s so powerful about the Psalms are, as well as they’re being gospel and songs of praise, they are also the Blues. It’s very important for Christians to be honest with God, which often, you know, God is much more interested in who you are than who you want to be.”

Bono and U2 band performed in Bogotá on “The Joshua Tree Tour 2017”. In the concert he performed the famous song “One” and before it he said a prayer asking for peace to Columbia.

We remind you, that U2 singer Bono was born in Dublin on May, 1960. His real name is Paul David Hewson. His father was a Roman Catholic and mother was a Protestant. Bono is married, the couple has 4 children.  His musical career  started from the Christian music. Psalms and church hymns were source of inspiration for his music. In the years of the peak of  popularity Bono to some kind abandoned his faith, but it seams that now he is coming back to Jesus and tries to get back what  was  lost in years.

Bono tour continues and he together with band will visit Argentina, Chile, Brazil. Who knows, maybe parishioners in one of the ordinary city churches will have possibility to see unexpected guest Bono and his crew participating at Mass.